Brussels, Belgium, November 9, 2017 – Having played its part in the ‘Year to Go’ celebrations at Le Golf National in France, preparations are now underway for Club Car to provide a 500-strong fleet of vehicles to The 2018 Ryder Cup.

The 2018 edition of the biennial match will mark the 21st year of Club Car, a world-leading manufacturer of small-wheel, zero-emissions electric vehicles and a brand of Ingersoll Rand, being an Official Supplier of The Ryder Cup. 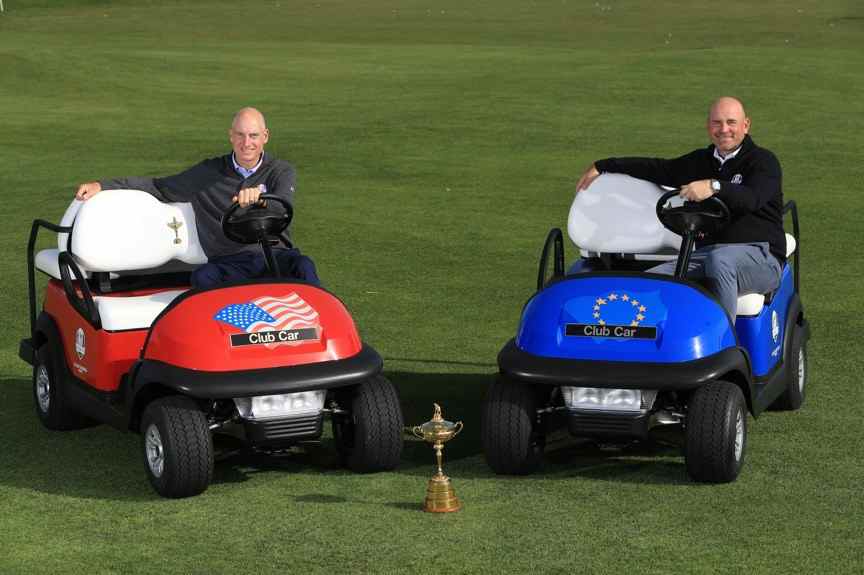 “Seeing both captains in their team cars at Le Golf National for the first time was a very proud moment for everyone at Club Car,” said Marco Natale, vice president of Club Car in EMEA. “There have been many memorable images over the years that showcase the important role the cars have played in The Ryder Cup matches, not least Seve Ballesteros navigating the course at Valderrama, enroute to victory the last time the event was held in continental Europe and we look forward to again playing our part in what is sure to be a great sporting contest next year.”

As in previous years, Club Car’s involvement in The 2018 Ryder Cup extends beyond the requirements of the two teams, with vehicles supplied for use by rules officials, television production teams and staging staff.

“The Ryder Cup is an event that never stands still,” said Richard Hills, European Ryder Cup Director. “From its minimal environmental impact to the technical innovations being introduced across its fleet, Club Car is a valued, long term partner that has successfully evolved alongside the event.”

With less than a year to go until the 42nd Ryder Cup, preparations are now underway to ship a 350-strong fleet of golf cars, turf utility and transporter vehicles, from Club Car’s U.S. headquarters in Augusta, Georgia, while the remainder of the fleet will be sourced direct from its dealer network in Europe.

“The Ryder Cup is a huge logistical operation involving hundreds of vehicles,” Natale said. “However, having been an official supplier of The Ryder Cup since 1997, we have a detailed understanding of how to service the event and are perfectly placed to drive the on-course logistics of one of the world’s largest sporting events.”

Club Car has been one of the most respected names in the golf industry for more than half a century. The Club Car product portfolio has grown to include much more than golf cars, now encompassing golf and commercial vehicles, multi-passenger shuttle vehicles, rough-terrain and off-road utility vehicles and street legal low-speed vehicles for commercial and consumer markets.  For more information, visit www.ingersollrand.com or www.clubcar.com.