When the New England Patriots and the Philadelphia Eagles faced off at the 2018 Super Bowl LII football championship game, they were backed by another team of champs: Club Car® , maker of Carryall® work utility vehicles and a brand of Ingersoll Rand® , and United Rentals, the world’s largest rental equipment company and the largest equipment supplier for the game.

“We’ve enjoyed a long relationship with United Rentals and were pleased to pull out all the stops to meet their needs for this challenging project,” said Mike Conley, strategic account manager at Club Car.

United Rentals began planning for the event in the summer of 2017, and Shawn Dressler, general manager for United Rental’s Minneapolis-St. Paul area, issued the initial purchase order for the vehicles in early September for delivery Jan. 2–5. Club Car geared up production to meet the schedule and deliver the 100 new Carryall 1500 and 1700 utility vehicles with the required specifications, including GPS capabilities, needed for the job. Meanwhile, United Rentals tackled logistical challenges. 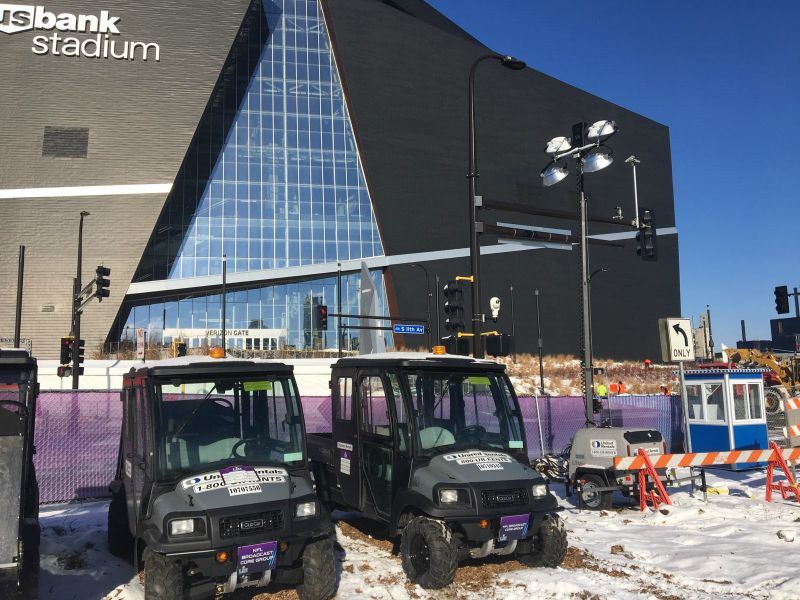 “We were relieved that Club Car could supply the large fleet in such a timely fashion,” said Dressler. “The delivery dates and spots were specific, and timing was a challenge, especially as game day drew near and security tightened. It was all hands on deck, and the whole team came through for us.”

United Rentals’ client, Noel Lesley Event Services who manages events related to the game, re-rented the vehicles to subcontractors for construction, vending, transportation, hauling and other purposes around the U.S Bank Stadium and other venues. “The same ease of operation, durability and safety features that earned the Carryall utility vehicle its reputation on construction sites made them ideal for this application and the icy conditions on game day,” said Conley.

That includes Club Car’s IntelliTrak™ automatic four-wheel drive system that senses the ground it’s on -- even when that ground is covered in snow and ice -- and shifts as needed, virtually eliminating the need for driver training.

“The cars also address problems that may occur in competitive vehicles that draw in air low on the back of the vehicle, where the rear wheels roll up dirt and dust. That can cause dirty oil, frequent filter changes and possibly costly engine failure,” Conley said.

Club Car’s air intake system sits high above the ground on the front of the vehicle, where less dust is generated and air intake is cleaner. “This system limited salt-laden moisture from entering the engine and causing filter or engine damage,” said Conley.

“The Carryall utility vehicles were a big hit, and our overall feedback was very positive,” Dressler said.